The nation’s largest, audience-judged theater competition, PianoFight’s ShortLived IX, returns with 48 short plays, all scored by the audience, and $5,000 on the line for the winning team.

The audience scores each piece and the piece that scores highest in each round clinches a spot in the Finals (September 11-12). Of the eight total plays in the Finals, the team that scores the highest will win the competition and the $5,000 Grand Prize.

Hundreds of artists, making 48 plays, over 9 weeks, scored by audiences to crown 1 champion and the winner of $5,000. Get local. Get arty. Get in to ShortLived IX.

*Finals tickets will go on sale after the close of Round 8. 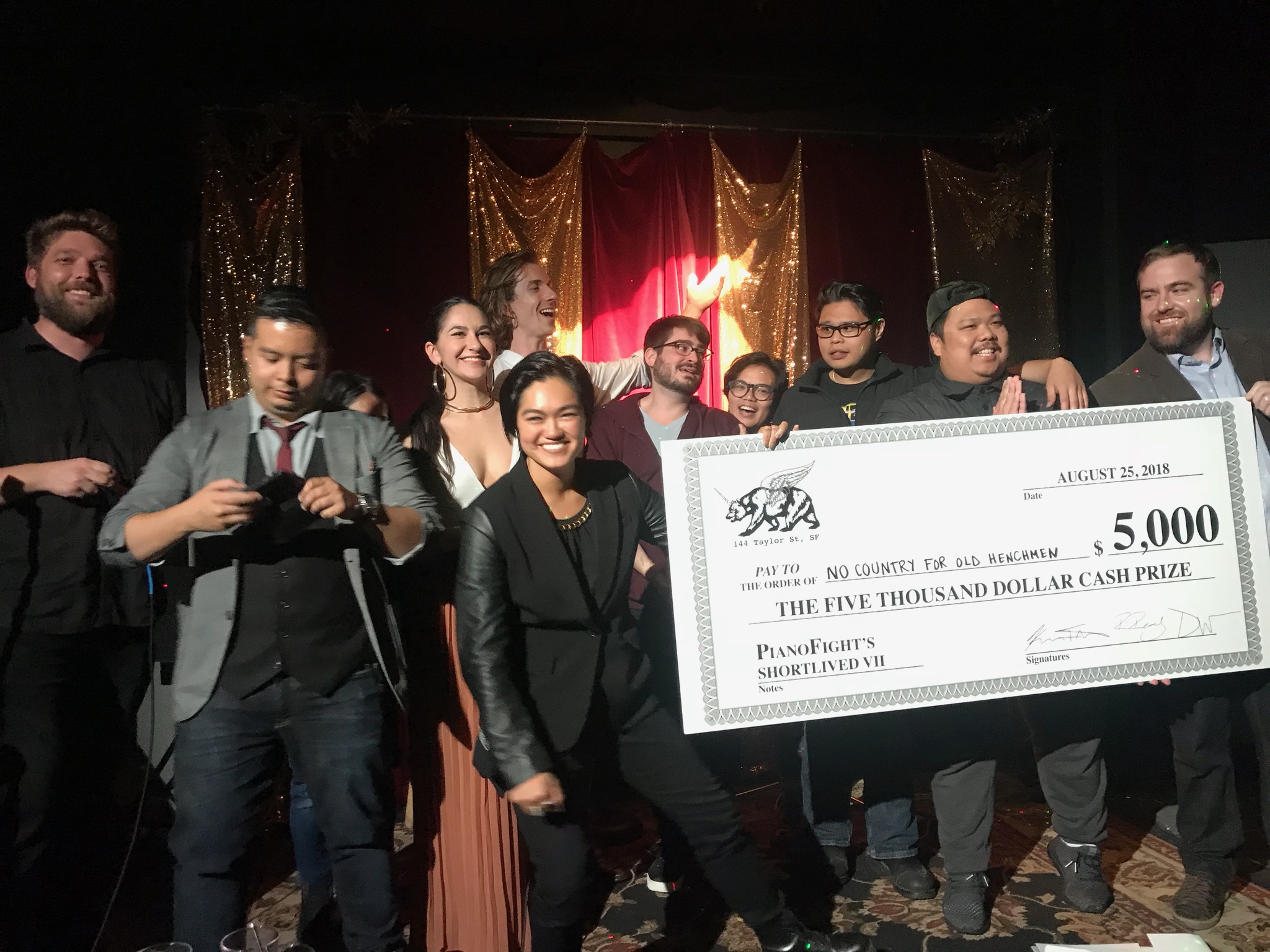 2018 winners, The Geek Show, with their piece “No Country for Old Henchmen.”

THE OPEN CHALLENGE: TO ALL BAY AREA ARTISTS

WHO: Everybody in the Bay Area

WHAT: ShortLived IX. The largest audience-judged theater competition in the country.

Hello Artists. Do you think you’re good? You got what it takes to make an audience laugh, make them cry, think?

Well then PROVE IT. It’s that time of year where PianoFight gathers indy artists of all stripes to compete in the nation’s largest audience-judged theater competition, ShortLived. And this is an open challenge.

Competition starts Friday, June 5th and ends Saturday September 12th (these dates may change). There will be 8 Regular Season rounds, and one Finals round. Each round lasts one week and consists of three performances — a Friday night at 8pm show, and two Saturday shows, at 5pm and 8pm. Each round will feature 6 short plays scored by each audience member to determine the winning piece. The winning piece of each Regular Season Round clinches a spot in the Finals. The Finals will include 8 total pieces (the winner of each round), have 2 performances, and the winner of the Finals wins the $5,000 cash prize.

WHO ARE WE LOOKING FOR?

HOW DOES THE CASH PRIZE WORK?

Simple – the $5,000 is split evenly between everyone involved in the play – ie, writer / performers / director / costume designer etc. all get the same share of the pie. If you are the only person who made your play, then you get $5K if you win the competition. If your play needed three actors, a writer and a director then each person gets $1K. If you have a 3 person cast, 1 writer and 1 director, but two of the actors have to sub out and you get two new actors for Finals, the prize is evenly split between the 7 people who made it.

All scripts should run 10 mins or less. There is no minimum length requirement. Props, costumes and sets must be minimal. If your piece requires an animatronic dragon, don’t send it. It won’t get in. If you’re a director who has a piece in which you can craftily figure out a way to make a fire spewing dragon appear while staying within the competition’s technical constraints, please do send it.

Comedies, dramas, musicals, movement-based pieces, devised work, and solo pieces are all acceptable. The only style or genre requirement is that there must be a working script.

Scripts should be new. This must be the first time your script has been produced on its feet with no scripts in hand. That means you have to write a new piece as opposed to submitting a trusty crowd-favorite from your repertoire.

Writers and groups may only submit 3 scripts in total.

This is a Locals Only competition. That means you’ve gotta live in the Bay Area to submit.

Submission should be standard script format. All scripts should be in PDF format.

Email subject should explain what you’re submitting and who you are – here are some examples:

Include in your email a headshot and resume (if you have them, if not, that’s ok too) and a time during the day when you’re available. We’ll get back to you with an audition slot.

It’s a group audition that will last less than an hour. You’ll do a warm up, a game, a cold read, and some singing. No need to prepare a monologue, and don’t worry about the singing – just go for it and have fun!

To be considered as a ShortLived Director, please send your resume to shortlived@pianofight.com with the subject:

Deadline to submit for Directors is Tues, February 25th at 11:59pm. We’ll follow up with a quick interview.
NOTE: Directors must be available for auditions, happening Sat, March 28 from 10a-5p